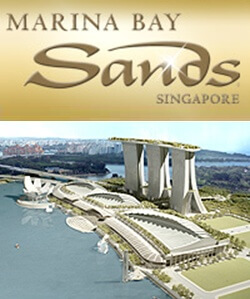 A Canada-based Asian high roller named Jian Tu had run up gambling debts totaling CA$9.26 million (S$9.94 million) after gambling at the Marina Bay Sands Singapore back in February 2013. He tried to put one over The Marina Bay Sands Casino by burying his head deep in the sand, so to speak; and by filing a motion to dismiss the legal claims filed by The Marina in the Canadian courts. However, Tu’s attempt to avoid paying his substantial gambling debts was thwarted by the Superior Court of Ontario by rejecting Tu’s petition.

As a backgrounder, The Marina Bay Sands was able to track down Tu, after pinning down his location in the city of Markham in the Greater Toronto Area. Apparently, The Marina Bay Sands is one of the prominent Singapore casinos that had extended credit to overseas-based whales, at a time when competition with Macau casinos was very stiff. Reports have it that the gross casino collectibles of The Marina Bay Sands as of September 2014, stood at S$984 million.

As their high-roller creditors ignored collection letters and notices of demand from lawyers and collection agencies, The Marina Bay Sands physically went after them in order to collect debts, and if necessary attach properties by going to the local courts. In taking such steps, The Marina Bay was able to take legal action against Jian Tu.

The Singapore-based Sands casino filed a petition in Canada’s courts, seeking to seize Tu’s assets as payment of his gambling debts. In 2014, a default judgment was served by the court on the matter, in favor of The Marina. Tu failed to appear in court to answer the legal charges filed against him by the Singapore casino. Still, Tu attempted to evade the court’s orders by avoiding the serving of the judgment notice.

In order to free himself of The Marina Bay Sands and of the millions of gambling money owed, the Markham-based high roller filed a petition to dismiss the lawsuit filed by The Marina against him. Tu argued that based on the agreement entered with the Singapore casino, any dispute related to the money granted as credit during his stay at The Marina Bay, is to be settled or resolved in Singapore.

In explaining why he did not present such argument when he was summoned to appear in court during the hearing of The Marina Bay Sand’s lawsuit, Jian tu maintained that he received neither the court summons nor the notices of judgment. To support Jian Tu’s claim, his wife submitted an affidavit stating that since Jian Tu travelled most of the time, he did not receive any of the papers that the casino tried to serve.

Unfortunately, for the Canada-based high roller, Justice Sean Dunphy of the Ontario Superior Court rejected Tu’s petition for dismissal, including allegations that he was not aware of The Marina Bay Sand’s debt collection pursuit.

Justice Dunphy ruled that Tu had no real defense regarding the matter. The Ontario Superior Court Justice stated that the court should not be likened to a sandbox playground, with which petitioners can expect to file motions for corrections on demand. Based on the merits of the case, Justice Dunphy remarked that the only reason why Tu is petitioning for the transfer of The Marina Bay’s lawsuit against him is to delay further, the payment of money owed to the Singapore casino.