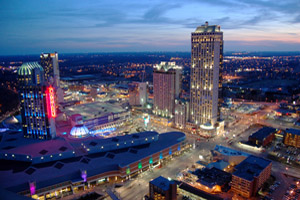 Seeing how the gambling market in Canada has grown and evolved over the years is quite interesting. Gambling was made legal in the country back in 1985 but it took many years before the gaming industry has become what it is today.

Generally speaking, gambling is as popular in Canada as anywhere else in the world. However, being a stable and prosperous country, Canada has a fair number of people with access to disposable income. It would seem that a decent percentage of that income goes towards different forms of gambling, both live and online.

Of course, with the development of technology, Canada also saw a boom in online gaming, with more people flocking to digital gaming options. In terms of popularity, sports betting is in the lead, with a special focus on the favorite sports of Canadians like ice hockey.

According to relevant and trustworthy studies, Canada’s gambling industry brings somewhere around €12.4 billion in revenues every year. Given the population of around 37.5 million, this definitely puts the country in the top bracket in terms of yearly gaming revenues.

The gaming industry in Canada did take a hit in the period between 2015 and 2020. Factors such as relatively slow growth in average income and growing costs of living left Canadians with less spare money to spend on their hobbies and entertainment activities such as gambling. However, things seem to be looking up.

This is especially true for the online segment of the market. Like in other parts of the world, Canada is turning more and more towards online gambling via home computers and mobile devices. The convenience of online casinos coupled with attractive promotional deals and a great variety of gaming options have definitely played a big role in the development of these trends.

Land-based venues are finding it increasingly difficult to compete with their online counterparts. Regardless of how hard they try, brick and mortar establishments simply can’t compete with certain aspects such as the ease of access, high levels of anonymity and discretion, and generous bonuses. Running costs and the very nature of physical gambling halls simply make it impossible.

As for the players, they’ll always go where they feel they’re treated better. While some levels of consumer loyalty do exist in the gambling sector, there is a limit as to how far they extend. Even those who still frequent land-based casinos tend to split their time and their money between live and online play.

As mentioned, sports betting seems to be one of the favorite choices of Canadian gamblers. Horse racing is very popular in the country that hosts more than 40 different tracks. So, many Canadians will spend their time watching races and placing bets, making a proper event out of it. For those who enjoy social aspects of gambling and crowded places, this is an easy pick.

For online betting, there are no surprises. Hockey is by far the number one pick of Canadian punters. However, internet bookies don’t discriminate and they offer a wide variety of options for all tastes. The Canadian Football League, for example, is quite popular, as is Lacrosse given the fact Canada has produced some of the best Lacrosse players in the world.

For casino games, video slots are leading by a big margin. This is no surprise, either, since slots are in general the most popular gaming category on the global level. Online casinos catering to Canadians do their best to keep up, featuring colorful libraries of games with many classic titles and various new releases.

But the question is, what lies ahead for the gambling market in Canada.

Experts believe that the period of stagnation and decline is now over and the market will continue to grow in the years to come. The expected growth in economy should lead to people having more disposable income which, in turn, will lead to more spending. There is no doubt the gaming sector will be one of the big benefactors of this trend.

The implementation of new technologies such as VR games should further help bolster the gambling industry. New and different games will likely attract new players including those who don’t find the current setup very appealing. The next generation of games will be targeted at young gamers who have different expectations in terms of the experience and given the history, it’s highly likely the casino industry will deliver.