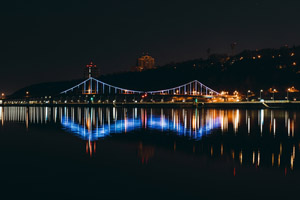 It seems Ukraine is finally ready to give the green light for all forms of gambling including online casinos. The Verkhovna Rada, the country’s legislature, has passed the new gaming bill with 248 votes in support and 48 votes against. The bill was passed after the second reading and in its current form it stands to regulate both online and land-based gambling.

Dubbed 2285-D, this bill was subject to many changes and amendments in the previous months. It was initially introduced back in October of 2019 but it failed to get the necessary support from the Parliament in December of the same year. After a number of amendments were added to the bill, one of the most important ones raising the minimum gambling age to 21, it passed the vote on the second attempt in January of 2020.

Although the bill has been passed by the Rada, there are more than 100 amendments that were added to the latest published text. These amendments are still unknown but were likely selected from more than 3,000 suggestions provided by the opposition.

The language of the bill is somewhat unusual when compared to similar bills in other countries. It mentions that operators and game suppliers applying for the license must not be under control of residents of a hostile country. This clause is clearly aimed at Russian-owned and/or operated businesses. However, it doesn’t seem to apply to iGaming content developers.

Taxation Matters Still in the Balance

Taxation rates are one of the most important parts of any gambling bill. At the moment, this area isn’t defined by 2285-D. There are several different proposals dealing with this this matter at the moment and it’s not certain what path the government will eventually take.

The latest proposal of the gambling taxation bill suggests different GGR rates for bookmakers (5%), online operators and lotteries (10%), and slots (12.5%). A couple of bills that were proposed before this suggest a much higher, unified taxation rate of 25% GGR on all regulated activates.

Lower taxes would likely attract more operators and provide a more competitive market. On the other hand, the country’s been anti-gambling for so long that it would come as a surprise if they decided to go with higher taxes.

Gambling in Ukraine has been illegal since 2009 (except for the state lottery). Current President Zelensky has been the supporter of regulated gambling and he played a major rule in the current development. In October of 2019, he expressed his support for a bill that would finally legalize gambling, allowing live casinos only inside hotels, and was keen to remove illegal slots from Ukrainian streets.

After the bill was initially turned down, Zelensky started to enforce the country’s anti-gambling laws much more rigidly. Numerous online casinos and gambling operators were blacklisted by Ukrainian ISPs with the list growing to almost 100 names by May of this year.

With the gambling bill finally making through the Rada, it seems Ukraine won’t have to wait long to see its first licensed casinos. There are still many things that need ironing out but the country has taken a major U-turn that has been in the works since 2015. Of course, it will be interesting to see what amendments were included in the original bill by members of the Rada as these could be quite significant for the future of gambling in the country.

Gambling was legal in Ukraine before 2009. In that year, a major fire broke out at a Dnipropetrovsk’s slots parlor, taking lives of nine people. Following the incident, all forms of gambling were made illegal except for lotteries operated by the state.