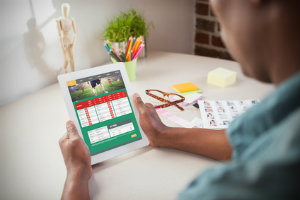 Daily Fantasy Sports (DFS) in the United States of America has created an extraordinary opportunity for sports fans to place wagers on their favorite players and teams. The two main sources for daily fantasy sports are DraftKings and FanDuel, providing sports fans with the opportunity to win large sums of money in massive competitive tournaments in dozens of different sports.

Daily Fantasy Sports walks along a perilous pathway in the United States, but finds a way to convince governments and states that the wagering is based on skill, rather than luck. This argument allows fantasy sports websites like DraftKings to operate legally in all but a hand few of states. In the next several years, legislation will likely be debated in all fifty U.S. states to establish a precedent for the daily fantasy sports industry, which is still relatively new.

Sports fantasy games are popular for sports fans because it makes any regular season game, or tournament have an additional layer of complexity, especially when large sums of money are on the line in many of these fantasy tournaments. DraftKings offers dozens of high-paying contests on a week-to-week basis, including some contests that pay up to one-million dollars to first place.

DraftKings expressed its excitement in offering these tournaments to the public, but also recognizes that its ultimate goal was to try and offer DraftKings to as many sports fans as possible. In regards to the future, DraftKings has hopes of becoming a legal sportsbook in the United States one day, and has even taken steps internally to try and begin this process.

New Jersey is currently in the midst of a significant Supreme Court case debating whether sports wagering around the United States should become legalized. This court case could establish or demolish hopes of this potential online wagering expansion across America. For now, daily fantasy sports will continue in its current form, providing additional excitement to thousands of sports fans in the United States.

As regulation continues to enter the daily fantasy sports industry, more and more states are beginning to legalize the concept of fantasy sports wagering, and are starting to consider it a game of skill, rather than chance or luck. This simple concept plays a huge role into whether or not this type of wager is considered illegal. The United States of America is not yet ready to take that next step to officially legalize online wagering to a national level, but it is possible that the seeds are planted for a long and slow expansion towards that unlikely possibility.