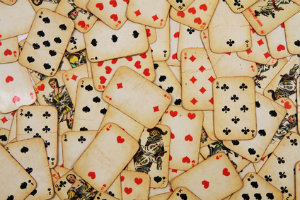 The New Jersey revenue numbers suggest online poker is dying in the United States. The online gambling sites in New Jersey earned $21,992,124 in revenue in February but only $1,772,988 came from online poker. Last year the revenue for online gambling showed an increase of eighteen percent for the same month but online poker revenue decreased eighteen percent. The market is led by PokerStars. Their revenue last month was $700,000. This is nearly forty percent of the market share.

PokerStars has a reputation as the best site for online tournaments and runs the largest weekly tournaments throughout the industry. Their 28 event online Turbo Series in New Jersey fell short of their expectations. The Main Event guarantees $25,000 and drew 382 entries making the prize pool $35,000. Nearly half of the additional events did not draw enough players to meet the prize pool guarantee.

This means PokerStars has been forced into the position of doing more than leaning on their reputation in the world and offering a series of standard tournaments. They must look for success somewhere else to be able to increase the Garden State’s online poker numbers. The company has run two live events that have both been a disappointment in Atlantic City. There are no answers as to their solution to turn everything around.

The online poker network for Caesars Entertainment includes their World Series and 888 Poker. In February this poker branded site earned $546,736 in revenue. Borgata’s poker sites including the new playMGM Poker, partypoker NJ and Borgata Poker earned $532,936 in revenues. WSOP.com is trying something new in an attempt to increase growth in March. The site will host a gold ring event for the Poker Circuit World Series. This will coincide with Atlantic City’s Harrah’s WSOP Circuit live event. The tournament has a buy in of $365 and is scheduled for March 18th. The first gold ring event in the series was in Nevada in February. This drew 420 entries and a prize pool of $137,760 was created.

The online bracelet events of WSOP have been proven to be among the most successful tournaments in United States history for both regulated and legal online poker. The first event was in 2015 with a buy in of $1,000. The event drew 905 players with a prize pool of $859,750 and was won by Spinella. The following year the entries totaled 1,247 and the prize pool exceeded seven figures. The $1,000 event in 2017 drew 1,312 entries and the prize pool hit $1,246,400.

There were two additional bracelet events run by WSOP.com. The buy in for the first was $333, drew 2,509 entries and had a prize pool of $752,700. There were 424 entries from the high roller for a prize pool setting records at $1,335,600. Four bracelet events are being prepared by WSOP.com this year during the WSOP. They will also be running a ring event for WSOPC this weekend in New Jersey. They are hoping they will breathe a little life back into the Garden State with these online poker events.