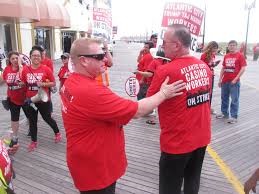 On July 14th a majority of the UNITE HERE members that had been striking at the Tropicana Atlantic City hotel and casino received their new contracts, one that 99 percent of the group signed off on. The Associated Press report concluded that members had ratified a contract that suited the workers.

The other properties owned by the Caesar’s group, including the Tropicana casino, had come to terms with workers back on the eve of the strike that started back on June 30th. Out of the total 9,600 Unite Here members, 5,000 of them are covered under agreements in par with the Atlantic City casinos.

The casino group had given up components of the worker’s original package back in 2011 when they were facing financial hardship, which workers have now been seeking once again now that the casino group is doing much better in terms of profits. These benefits included one week of paid vacation a year, an incremental hourly wage increase that grew by 60 cents a year up to a total of a $3 hourly increase after five years, as well as health benefits. While an agreement with Tropicana was reached, the casino has yet to make it public.

Atlantic City has already approved upwards of $44 million in new contracts with Unite Here workers, including the groups from Caesars, Harrah’s, and Bally’s. However, there are over 1,000 members of the group that are continuing to strike over at the Taj Mahal casino. The former Trump owned casino has made a few offers that the group has refused to accept. The most recent included a health care package. Tropicana Entertainment’s president Tony Rodio announced that the latest health care offer will be off the table as of July 18th at 5 pm if the group refuses to accept it before then. Despite this, the Unite Here members at the Taj Mahal have shown no signs of accepting the new contract.

Trump had passed down the casino to billionaire Carl Icahn several years ago during an overhaul of the casino, who also owns Tropicana. During the negotiations, Icahn had convinced the bankruptcy courts to remove the benefits that the union members had previously held, which would take away both their health and pension benefits. The benefits that were cut to employees received a cut of 35 percent. When the strike started Icahn had stated that he believed the new offer would have been approved by union members, but it was not. Unite Here president Bob McDevitt stated that the offer the group had received was only a “shadow” of what other Tropicana casinos were receiving as reported by the Press of Atlantic City.

The cost of living in the area has risen by as much as 25 percent over the last decade, and yet Taj Mahal workers have only received wage increases of less than a dollar. Most workers at the casino earn under $12 an hour, which makes it very hard for them to make ends meet. Many of the workers had relied on the health insurance that was formerly offered by the casino to full time employees.