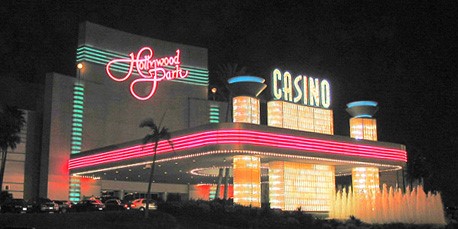 The Hollywood Park Casino that began development in July of last year is just a single business in the ever growing area of Inglewood Community that has new facilities popping up all over the place. The community sits just a couple minutes outside of downtown Los Angeles. It consists of 110,000 square feet that rests on an 11 acre plot of land. It is much larger than the former casino with a 40 percent expansion. The new casino will include 125 gaming tables, hundreds of slot machines, a relaxing lounge area, a flashy new sports bar, and so much more. Betters can enjoy their winnings at the Century Bar and Grill, which is a new restaurant that will be available right in the heart of the casino.

Deven Kumar, the Hollywood Park Casino general manager, spoke about how the casino will feature many elements that were found in the older version to hold on to the classic form of the original 1930s model. Added in are assets made available with luxury and convenience in mind. Being in a major part of Southern California, the casino will have plenty of palm tree iconography placed throughout the casino and lining the drive that leads to the valet parking area. Taking on a bit of class, the casino will have plenty of artwork and social areas to spruce up the place. The design is meant to serve the next generation of gamers while also appealing to the already established set of gamblers that appreciated the older model of the casino. It will feature many favorites like Baccarat and Blackjack and various poker tournaments.

The casino also hopes to bring about development within the Inglewood community. It is expected to create a bunch of new jobs and tourism traffic. The community has faced many hits over the years, from 1999 when the Los Angeles Lakers had departed from the Forum to the 2013 race track closure. Not to mention that the previous Hollywood Park Casino had lost a lot of traction due to competition rising up in the area. The Bicycle Casino in the Bell Gardens Community had recently done a $50 million makeover to their casino to upgrade its facility for gamers, while the San Manuel Band of Mission Indians had done a similar overhaul on the same budget for their own casino.

The casino will specifically seek to appeal to large spending football fans that will be looking to enjoy themselves while attending games at the City of Champions Stadium that is expected to be completed by 2019. This stadium will be the home of the Los Angeles Rams after their long absence. The casino is doing a job fair to bring in new employees on July 15th, looking for positions from cooks to dealers.