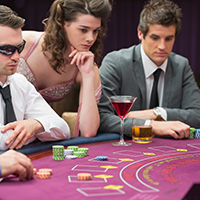 Mayor Jim Diodati said last Wednesday that the continuing decline of Ontario casino revenues for almost a decade now requires taking a bolder step. He believes that, the serving of free drinks at casinos is something they should seriously look into to avoid being beaten out of their own game.

The Niagara Falls Mayor explained that aside from the present day stricter border restraints, upstate New York casinos have successfully drawn away Canada’s gambling customers by offering free drinks. Although Canada is offering tax-free winnings, only the casino winners enjoy such amenities. Mayor Diodati said that about 30 percent of Canadian casino regulars have been won over by NY casinos because of the complimentary drinks; but in terms of Canadian casinos being able to attract U.S. clientele, Niagara Falls casinos, for one, are able to get only five (5) percent of the market.

He added that Canada has its own flock of tourists, but despite being a better tourist destination and the offer of tax-free winnings, Canadian casinos are still losing their gaming clientele to gambling destinations in New York. Mayor Diodati’s opinion is that when it comes to gambling, customers would prefer to lose money in joints where they, at least, have a couple of drinks courtesy of the house.

The Press Secretary at the Ministry of the Attorney General Christine Burke gave her comment via email in which she stated that, the Liquor Licence Act has an exemption provision that permits the serving of complimentary drinks in OLG premises that have restricted public access, such as VIP events. Ms. Burke recommends for Mayor Diodati to put forward a request to the Registrar of Alcohol and Gaming (RGA) but it is unlikely that the Canadian RGA will approve the serving of complimentary drinks to all casino patrons. She added that Mayor Diodati has to submit a petition seeking to change the rules about serving free alcohol in casinos.

To drive his point, the Niagara Falls Mayor cited as example the city of Windsor, home to Caesars Windsor one of the largest casinos in Canada, and regarded as one of the largest local employers. He specifically points to the 28 Caesars Windsor workers laid off this January 2015, as example of a failing casino business, albeit not necessarily the same reason given by the Caesar officials.

Jhoan Baluyot, official spokesperson of Caesars Windsor said they have not considered what works, but Caesars Windsor is not interested in serving free drinks and they have not speculated on it as an option. She added that as of the present, they intend to continue their offers of world-class entertainment, first-rate amenities and unmatched services, as those are what they do best.

Windsor Mayor Drew Dilkens said he agrees that the offer of free drinks is certain to attract a different clientele, because he has seen such amenity being offered in Las Vegas. However, Mayor Dilkens remarked that since alcohols is a high-priced commodity in Ontario, the cost of serving rounds of free drinks may actually exceed any benefits.

He added that he is more inclined to agree with the suggestion of Local MPP Percy Hatfield (Windsor-Tecumseh), which is to direct their attention on getting approval for legislation that will allow sports betting into Canada’s casinos. He also mused that if Michigan and Ohio follow suit in offering free drinks in casinos, Ontario will only end up outcompeted in the long run.